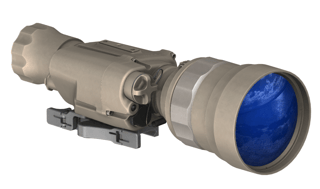 Night vision technology has been a critical component of the defense industry since World War II. The demand for newer and better instruments has only increased. To address this growing need, RPO has developed a new, alternate approach to night vision technology that avoids the inherent technical limitations of older technologies. RPO’s new product is called CNOD (CMOS Night Observation Device). To understand why CNOD beats existing technology requires explaining what that technology is. Two technologies have dominated the night vision field: image intensifiers and thermal imagers.

Image intensification is the older approach. In its simplest form, an image intensifier is a vacuum-tube system that uses the photoelectric effect to turn near-IR photons into electrical charge; high voltage then amplifies the electrical charge, and a phosphor screen converts the electrons into visible photons. The phosphor screen is why night vision goggles have the characteristic “green” view.

The primary problem with image intensifiers is a phenomenon called “bloom” which creates a circle of light or “halo” around bright points in the intensifier’s FOV.

Thermal imagers are digital cameras that detect mid-range infrared heat radiated from objects. The significant advantage of thermal imagers is that they operate in the absence of ambient light because they detect emitted rather than reflected light. The camera represents variations in heat using a “false color” display; objects that are closer and warmer are visually distinguishable from objects that are cooler and further away.

CNOD uses neither of these approaches. In upcoming posts, we will explain the concept behind CNOD and enumerate the advantages of CNOD over both image intensification and thermal imaging.